Alone in the Atlantic, Ireland really does look from the air like a precious green gem, cut into hundreds of irregular facets by low stone walls. Stone defines Ireland’s spaces, and in the permanence of stone is recorded haunting fragments of the Irish past.

The last glacier receded from Ireland 17,000 years ago. It left in its ponderous wake an island littered with stone. Primitive hunting and gathering peoples left the land as they found it. But the Neolithic (“new stone age”) revolution of farming required the fields to be cleared for planting, and so the wall building began. 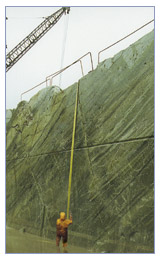 These Stone Age people used stone in another way: to build lasting monuments to their dead. First, they arranged stones into burial chambers with terraces described by rings of stones where religious rites may have occurred. These were court cairns. Then, stone was arranged to create graves with entrance passages and carved with decoration. The height of their art was reached in dolmens (which means “stone table”) where two or more standing stones were capped with a giant flat boulder to create works in stone that are today as much sculpture on an environmental scale as they were imposing monuments to the dead 4,000 years ago. The discovery that melting and mixing copper and tin would yield bronze ushered in the age of metalworking. Ireland’s Bronze Age inhabitants excelled in fashioning tools, weapons and ornaments from bronze, copper and gold. But for another purpose they still used the land’s most abundant material to construct circles of standing stone. Observatories, places of ritual, magic or religion – no one knows for sure what their purpose might have been.

The age of bronze gave way to an age of a still more durable metal – iron. And Ireland’s prehistoric peoples gave way to a massive influx of people from Europe who were to become the core of the rest of Irish history – the Celts. They, too, used the short stone pillars in graceful, curving relief; and they erected huge slabs on which were etched the slashes of primitive writing. Ogham stones, they’re called, after Ogmios, the Celtic god of writing.

St.Patrick and the coming of Christianity wrought changes on Ireland equal to the revolution of farming or the advent of metal. Yet still the stone was used. First, by monks to build primitive living quarters, which were fashioned without mortar. And then, after the Viking invaders had swept across Ireland looting the monasteries of their treasures and burning the wooden churches, the monks turned to building their churches of stone, as well. Soon, monastery compounds would sprout 50 to 60-foot tall towers of stone. The famous round towers of Ireland served as both bell towers to summon the faithful and as redoubts from raiders, their entrances were at the second storey level and the monks’ access and access was by retractable ladder.

The urge to transform ordinary stone into megaliths (from the Greek words for “big stone”) of meaning found its Christian expression in the high cross. The first simple crosses with circles around their intersections date from the 7th century. The Celt’s love of decoration, however, soon had high crosses carved with elaborate scenes from the Old and New Testaments. They may have served as picture Bibles for the uneducated, as well as well as lovely monuments to piety. In the 12th century an unprecedented wave of building swept Ireland – churches, cathedrals, chapels, monasteries, castles, public buildings – but the primary building material remained the same: stone left behind millennia before by glacial ice, and as the population grew and the land came to be divided up into smaller and smaller pieces among the sons of each generation, walls of stone marked the boundaries.

Ireland is a well-worn land. On its soft face is evidence of the work of the hands of innumerable generations. For the most part, those hands worked in stone. And the record of the past remains because of it, tangible evidence of a history that slides back unbroken into the misty Irish dawn.