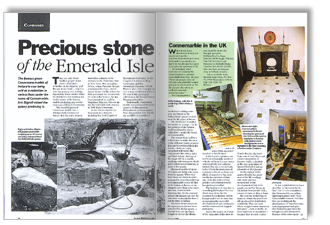 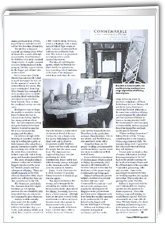 There are only about 5 million people in the whole of Ireland – 3.5 million in the Republic and the rest in the North – which is why Kevin Joyce was looking beyond the home market when he decided to start working the family quarry in the famous marble – producing area on the west coast of Ireland, Connemara.

The beautiful green of Connemara marble has a distinguished international history. It is the stone in great monolithic columns at the entrance to the University Club in New York, USA, in Laplaya Palace, where President Reagan entertained the Pope, and in Leinster house, Dublin, where the Irish parliament sits. It can even be seen in the Vatican, having been presented as a gift by Guglielmo Marconi, who set up the first radio link with America in 1901 from Connemara.

In the UK the marble has been used in cathedrals, including the Irish Chapel of Westminster Cathedral, in the chapel of St.John’s College, Cambridge, and the Ashmolean Museum, Oxford. There is also a fine example of a huge sculptured bowl on the way to the geological collection at the Natural History Museum in London.

Traditionally, Connemara marble was produced from the quarries of Streamstown, Ballynahinch and Lissoughter. Now dimensional slab and tile are available as a result of Kevin Joyce adding some new machinery to his Ballynahinch quarry located near the tile plant at Recess.

His intention is to market the marble as a range – or, in the parlance of fashion world preferred by Joyce, ‘collection’ – under the brand of Connemarble.
The reason there will be a collection is to make the most of the different shades of green that can be produced from the blocks – there are eight altogether with names like Variegated Olive, Moss, Light and Dark Lichen. And top of the range will be a marble sparkling with iron pyrite (fool’s gold) which occurs naturally in parts of the quarry.

Blocks of marble of up to 40 tonnes are being wire-sawn from the quarry.
When they have been cut down to more manageable sizes they either go to Connemarble’s own tile line in the factory at Recess or are shipped out to Italy to be sawn into slab, Connemarble believing that, for the moment at least, the Italians can saw the slab more economically than it can be done in Ireland.

The level of investment in the operation so far has been considerable. In the quarry, a Dazzini wire saw has been bought to cut out the blocks and a 40 tonne O&K excavator installed to handle them.
In the factory, a primary saw has been substantially modified with the addition of a new motor and completely new software. Ireland, they say is second only to the USA in the production of computer software, so there was plenty of expertise to buy in to modify the operation of their saw. A tile line with a Cemar polisher and a Breton beveller has also been installed. 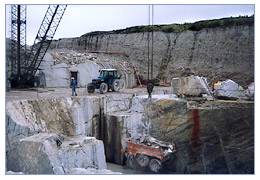 The buying in of expertise is something Kevin Joyce has not shied away from. He has recruited Kevin Kidney, whose background is not in stone but in managing the successful development of new companies and the turnaround of sluggish performers. And in the quarry, in charge of the extraction of the stone is Charlie Bourke, the Lord Naas, son of Lord Mayo and a direct descendant of Grainne Uialle, a chieftan in the area in the time of Queen Elizabeth I and an adversary of the Queen’s.

In the context of the quarry, Bourke has spent most of his life working with stone and was instrumental in the development of thin stone panels, created by facing an aluminium honeycomb with a veneer of stone as thin as 5mm.
He took the technology to America, where the panels are still produced for distribution worldwide. They are used where weight is more important than price – such as in lifts, in boats and even in aeroplanes – because they do carry a price premium. 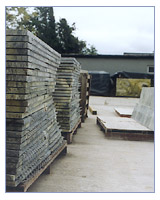 It was a product Kevin Joyce describes as “too soon for its time”, but it is no coincidence that Connemarble are selling lightweight panels with 7mm Connemarble veneers. Nor that they are working on the development of 7mm floor tiles, resin impregnated and glass fibre backed to give them the strength of a tile 20mm thick. Because of the extra square metres produced from a block, Joyce believes such tiles could sell for 10% less than 20mm tiles.

The tile line at Recess is currently producing about 100m2 of 12mm tiles a week, although Connemarble intend to reduce the thickness to a more standard 10mm shortly. A smaller amount of slab is being produced at the moment, but they expect slab to be the bigger part of their sales in due course. Kevin Joyce says Charlie Bourke has consistently failed to reach targets he was set for the amount of stone to be removed from the quarry. But Joyce is delighted about that. What Bourke has managed to do is produce twice as much workable block with half the amount of waste that had been forecast. That, in turn, has produced savings on wire saws.

In whatever size or shape the marble is available, Kevin Joyce believes the key to success is marketing. And he has strong opinions about that – he once rejected a shop design he had paid for from Terence Conran because he felt it was wrong for the product and the place.

He believes strongly in the branding of a product, which is why he is selling his marble as Irish Connemable rather than a generic Connemara marble. And he is making a lot of the fact that the stone does come from Ireland, especially with it being green and from the Emerald Isle. The point of emphasising its Irishness is that one of Ireland’s biggest exports over the years has been its people and their subsequent offspring. “There are 43 million people in the USA who call themselves Irish”, Joyce points out, adding that there are also a good many in the UK.

The Americans, particularly, like demonstrating their origins, but there are few quality products that are identifiably Irish with which they are able to do so. Connemarble gives them one. But it is a bright, lively product which, as a whole floor, could be considered a little overwhelming. However, used as a highlight with a more neutral field of light cream or pink, it creates an unusual floor without an exorbitantly high cost. This is how it is presented in Connemarbles newly opened showroom.